I started with the reflex servitors first, because they were small and ideal to test the color scheme on.

This is the result: 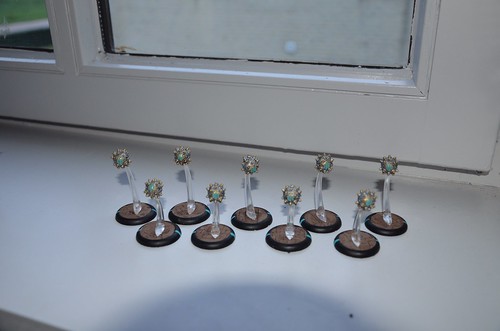 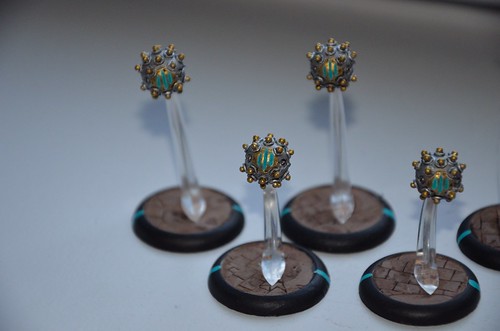 I was happy with the result and painted up the Reciprocators: 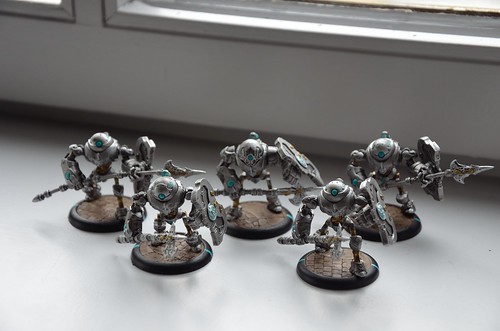 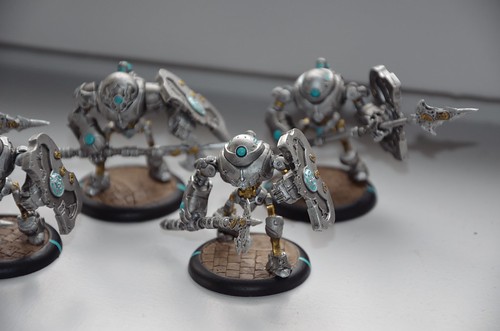 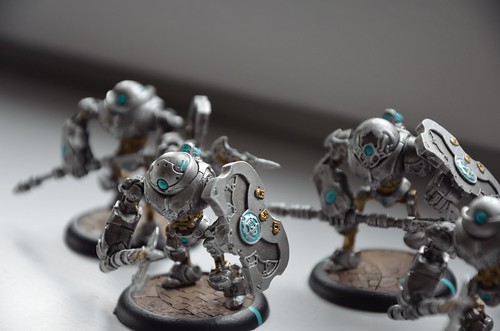 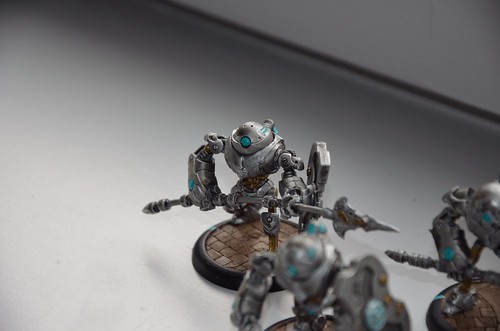 For those interested in the bases I used, they can be found here:
http://www.modeldisplayproducts.co.uk/

the type is Regal stone.

I started my faction planning as always, by browsing the pp forums and google for interesting paint schemes.

While some alternat schemes looked stunning, they required either airbrush skills or contained some of the harder to pull off colors (White and Yellow I’m looking at you!).

In the end the PP color scheme looks quite nice and I decided to apply it with my own method.

This is how the paint is applied:

First basecoat the entire model in Cold Steel, then apply Pig Iron to the darker surfaces and Brass Balls for the golden parts, also Quick Silver for the silver parts. (simply put apply every metal base coat in order)

After this wash the entire model with Nuln Oil.
Apply edge higlighting to all metals.
Paint the glowing parts with Menoth White Highlight and then again with Arcane blue.

The models that I currently own / have preordered are as follows:

-All casters (either owned or (pre)ordered)
-One of each unit, except angels (3 of those)(still contemplating on the need for a second unit of optifex directive)
-3 of each set of servitors
-2 arc nodes and 2 ua’s
-3 of each heavy chasis
-1 diffuser
-1 galvanizer
-1 Mitigator
-1 galvanizer
-2 axioms
-1 steelsoul protector
-2 enigma foundries

A short while ago I decided that it was time to give Convergence a try and This blog will a record of my experiences while painting / playing the faction.

I started playing almost 2 years ago, and my first games were played using the Cryx battlebox.

While Cryx is a nice faction, I felt more attracted towards the looks of Retribution, and so before long I started playing Ret.

Most of my play time was spent Playing Ret and while it was fun, it wasn’t verry encouraging as the learning curve was steep and well it had it’s problems. (With the added releases in Vengeance this has changed quite a bit towards the positive side)

After some pondering as to which faction suited me best, I reverted to my original choice and started playing Cryx again. This year I have attended several local SR tournaments, and I managed to place 4th each time.

SO “Why would you switch to COC (short name for Convergence of Cyriss) if you like playing Cryx so much?

Well I have been tempted since their release, because of how the army looks, the fluff behind it and the uniqueness of many things in the faction.
Switching to convergence also doesn’t mean I’m completely turning my back on the other factions.
In essence this is part of my quest to find the main faction which suites me best, while having a high enough fun factor.

COC as a faction is more budget friendly then other factions to start with as the amount of models released is smaller. For Ret this was a negative factor, however for COC the smaller pool of models still contains the required options for decent list building and has answers to most problems.

The long term plan is to have 3 factions (Ret, Cryx and COC) and to switch it up each year, so I can keep things fresh and experience the different play styles. This will hopefully expand my understanding of the game better than when playing one sole faction.

This weekend I will be attending Clogcon (www.clogcon.com) in the Netherlands, with Cryx.
And I am planning to start playtesting COC after that.

I did commit to play my models painted so, I will have to do quit a bit more painting in order to start playing the models ^^

The first few posts will be documenting my painting progress, and in about 2 months time I assume I will be able to start adding toughts and experiences.