A while ago, I started to playtest and theorymachine and quite a bit of trial and error was involved. Convergence looks so amazing, and I wanted this to be my faction so much.

I am positive that at some point they actually will be my faction, or atleast my second faction.

My warmachine history started with a cryx battlebox, and since then I built up my retribution army, then made a relapse into cryx, which lead me to convergence, and in the end I landed right back with Retribution.

I am far from a “top” player, and I feel that for convergence you somehow need to be. Just knowing the rules and the models isn’t enough to play “ok” with convergence. Comparing the factions I’m familiar with, Cryx obviously is the most forgiving one, and has quite the amount of options. And I never had a moment where I couldn’t choose between 5 casters for a tournament when I played Cryx.

Ret used to be first on my “steep learning curve” list, and when I played them that was pretty much the truth. Now with convergence, I feel like that spot has been taken over. Specially taking into account the recent releases for Ret in Vengence.

So if I had to sum up the factions based on my experience:

Cryx: Good casters, manny and decent options for units/solos etc. Good faction to start off with. Tournament play is slightly harder since ppl bring anti cryx lists, and so you’ll be playing lists tailored to counter exactly what you put on the table.

My greatest miss in cryx was the ranged aspect. Cryx is a verry much magic / melee faction and while ranged lists/ options exist, they are far from the factions focus. This is part of why I like Cryx less while I still think it’s a really nice faction to play.

It goes without saying that I put Cryx on top of the list when deciding which of the factions I own is more powerfull. Powerfull doesn’t mean unbeateable, far from even. However it’s a faction which has a different way of playing than most so it requires a different approach when you play against it, and thats an advantage on it’s own.

Retribution: Much more ranged options, and more ranged oriented in manny ways. However this doesn’t mean the melee or even magic options are missing. The faction has been able to swing either way for a long time, it just couldn’t handle several hard counters.

Recently with the release of models such as the Houseguard Thane and Issyria, stealth has become less of a hinderance, and before Epic Vyros allowed for a verry different playstyle using a multitude of light jacks.

I have always found the small caster pool to be a bottleneck for the faction, specially pré Vengence where the faction really didn’t have any caster really worth calling A rank, much less S rank (the place where Epic Lich and such dwell) Now with the latest caster release they are getting much closer to bringing a A rank caster pairing to an event.

Convergence: Lot’s of options for a small model pool, good synergy between the odels, and induction really allows you to run a larger number of jack without running out of focus. I initially tried to see if I could achieve a decent ranged setup using Mother, and it was close but still didn’t quite stand up to the test in the end? The low rat outside of the feat turn, and dependency onflare and aiming make it far less interesting to play the ranged game.

More jacks meant the volume of attacks compared to a more infantry oriented list was much lower and against mechanicks like tough that is a huge factor.

There’s no doubt that with more play time and experience I could make this faction work, it just doesn’t seem it will be easy.

Short term I’m going to go back to playing Retribution, the faction finally got a nice round of releases in the last book and I don’t want to let it go to waste. I also feel that it will be smoother to continue playing convergence when more information gets out on how list combinations work out, because starting from scratch leads to getting crushed on the tabletop and that gets old fast.

I already signed up for the European masters in Rotterdam in September, so I’m going to be working towards that event. I’ll keep posting my findings/lists and results here, and ofc my painting adventures.

I still have a few units and the second jack chassis to finish for convergence and sme units and solo’s for ret, so no shortage for models to paint.

As the title says I finished the first havy chassis and the last 2 lights I had to paint this week.

The floating heavy chassis, while already released, hasn’t found it’s way to my lgs yet, so I’m not going to be painting it for another week or so I assume.

I have the other chassis 3 time’s in total. One from the battlebox, and two other from the heavy kit. This allows me to set up the cipher 3 times, and the other types 2 times and gives me the freedome to create most list combo’s out there.

I find that for heavy kit’s 3 is always the magic number if the chassis is used for lists in the faction. (Cryx would be a verry different story for example)

Anyhow here are the pictures: 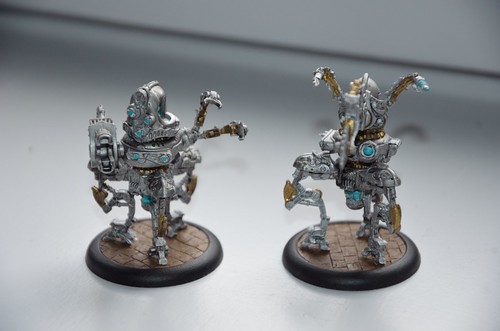 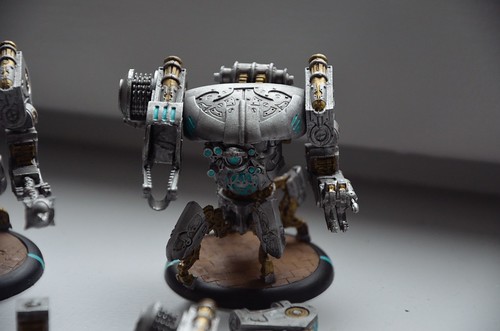 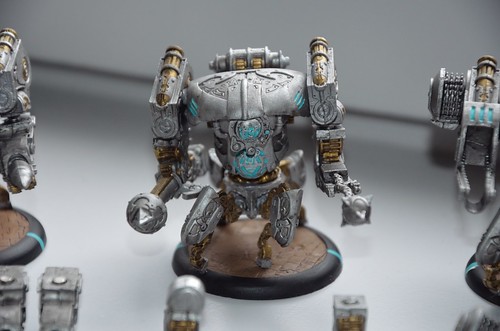 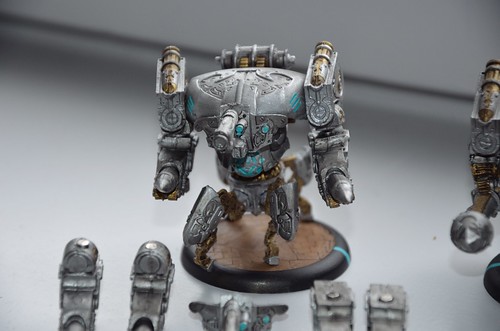 And a group shot with all the magnetized spare parts: 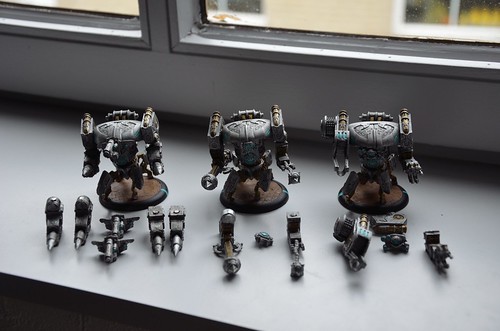 THe group shot turned out a bit too dark, however it just serves to give an idea of how manny parts you have when you magnetize 3 kits.