In my previous post regarding my lists for 2015 I mentioned that I still required more testing in order to validate using light artillery in my list. Well more testing has been done and I won’t be playing a tier 3 Fist of Halaak list.

The reasoning behind this is fairly simple. There are 6 scenarios, 3 have objectives, this leaves a 50 % chance to get a scenario where the objective is present.

This would be acceptable if the light artillery added benefits when not gaining the boosted damage rolls, sadly those benefits don’t match up to an extra min unit of Arcuarii.

Of the 3 scenario’s which have objectives only 2 provide easy access for the artillery pieces to gain the bonus, the 3rd one requires the models to go up field quite a bit further. The result is that the list would be tailored to have an advantage in 2/6 scenarios and to gain nothing from these models in the rest.

I really wanted this to be a thing, a variant for Fist; however my 2014 list remains the best option.

This brings us to the added value of objectives for Skorne as a faction. As things stand (unless there was a last minute revision) there isn’t much added value at all.

1) Cost reduction of the first cast upkeep spell. Mordrikaar could use this in certain situations, however it’s really corner case as most upkeeps are in play and being upkept and I don’t think I’ll be facing purification lists with Mordrikaar.

2) No knock down and standing up after resolving continuous effects. Skorne already has a mobile solution called Tyrant commander for that. And in Skorne I can’t really see a unit that hangs back enough to be close to the objective and benefit from this. At the same time the Tycom is mobile and has a toolbox that isn’t limited to just letting models stand up.

3) Sacrificing models to keep the objective alive and boosted light artillery damage rolls. This one had potential; the light artillery was an easy to implement option. However testing proved this to be wrong. The sacrifice of models would be a possibility if I ever make a list that has the shamblers; otherwise the models in my list are too important to be sacrificed.

4) No blast damage when b2b and one less die on ranged damage rolls when attacking the objective. This one seems the best option since it makes ranged objective destruction less probable.  Making the enemy come closer is never a bad thing for Skorne; given the slow speed for Fist and the focus on attrition this one seems valid. The blast damage option is nice but I see it as situational at best.

5) Cover and fearless. Both are not great for Skorne. The Tyrant commander and flag fill the fearless role, and do a great job at it. The cover seems really situational and even my only list that could benefit has a huge amount of defensive tech already which is more mobile and therefore better.

6) No spending fury to charge/ run. Beast handlers fill this role and as such not real added value as I can’t think of lists that don’t have beast handlers.

This makes the anti ranged option stand out as the best choice. It doesn’t depend on the presence of a specific model type and doesn’t require models to stay in place.

I can see myself putting the beast handlers base 2 base in order to get the blast damage immunity, still situational, but it is a valid option so I’ll file it under “nice to have”.

Regarding SR2015 in general, I won’t go into detail because it’s still considered beta testing and nothing is final and I don’t want to hype / burn down things before I see their final form on paper. What I do want to add is that terrain and scenario changes are interesting. I assume there will be broken combinations, then again this is inevitable and has always been the case so no real difference there, except that these may be different than before and shake up the meta a bit that way, which is somewhat positive as it brings change (good or bad we’ll see).

Less scenario choices is a good thing, at least that’s how I see it. Enough choices to keep variation, and no more “same scenario but with rectangular zones instead of round one’s…” just to get a long list of options.

The roll table to determine what scenario to play has become much compacter due to the smaller list of choices and feels clearer. The funny thing is that when we roll for scenario at our LGS we used to get incursion all the time with the old table, and we have the same thing happening with the new one, its plain weird. I think pp needs to change the numbering on the scenario’s once in a while to make up for average dice 😀

After a few weeks of slow painting (having a cold and busy working days + the union strikes) I finally finished my Cetratii.

This being the 3rd unit of medium based models who look pretty much the same, also made it less fun to paint.

All I still need to finish now for my pXerxis list are 1 unit of Arcuarii and 1 unit of Incendiarii. I will only be painting up 4 of each as the odds of playing 2 full units of each are rather small and for those rare cases I won’t mind setting up 2 non painted models at all.

However first I need to concentrate on finishing models I currently proxy. This means I reallt need to get my Keltari unit, maximus and my 2 void spirits done. And all of this by the 4th of January.

Since the Keltari have far less gold on their armor compared to the med based units, they should be painted up rather fast. Same goes for the void spirits as I will be painting their body in the same sand color as the bases and dry-brusing the highlights.

Anyhow here are the pictures: 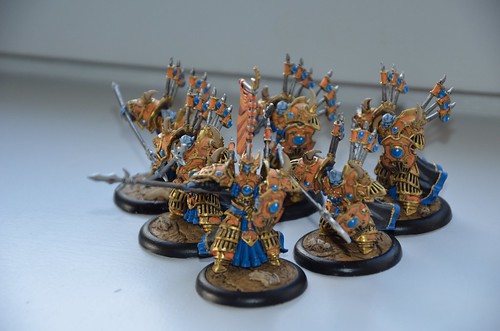 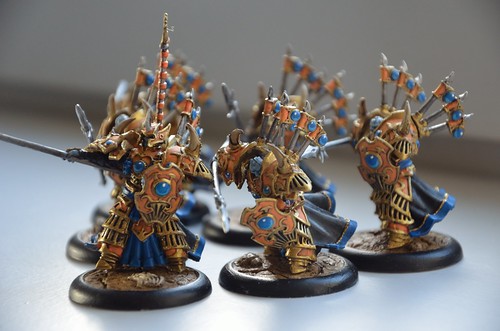 Since the 2015 Steam Roller beta seems pretty final at this point, I have made a new pXerxis Fist of Halaak list.

I removed a min unit of arcuarii from the list, changed the full unit of beast handlers by 2 min units and added the Flayer cannon crew twice.

Tier 3, so some added bonus compared to tier2, and directly applicable to the units I swapped in.

Tier1: Cataphract units become FA:Unlimited (nice however doesn’t affect this list at all)

Tier2: Reduce the cost of Cataphract units by 1 (this is the only reason this tier list is used so often)

The reasons for this change are to be found within SR2015, and since it’s still at the Beta stage right now, I won’t comment further on that specific reason and use an SR2014 element to explain.

In the SR2014 Scenario Fire Support, the objectives have an ability called Firepower.

Firepower: While this objective is not contested by an enemy model, the ranged weapons of friendly models with light artillery within 4″ of this model gain boosted damage rolls.

In short Skorne venator flayer guns have strafe D3 and gain +1 damage vs medium bases and +2 against Large bases. add an additional die to those damage rolls and that’s some potential right there.

This brings us to a nice 5 damage on average against a heavy. And the potential to have 6 shots total per turn. And 30 damage is nothing to sneeze at.

I do see some downsides, since Xerxes’ martial dicipline doesn’t include large based models and that means no moving trough the artillery and no ranked attacks…

This concludes that math and theorymachining part, and I wanted to get some play experiences on this new setup. Or that was the plan, before it horribly failed. Which also brings us to the sleeping part.

As I had a terrible week, having a cold and not that much sleep, my play was pretty terrible for both games I played and the artillery pieces themselves were destroyed on my opponents turn 1 (sad panda all over the place indeed).

The main error is that even if something has advanced deployment, it doesn’t mean it should be advance deployed and even if it is, it doesn’t have to be all the way out there either. Doing so get the artillery removed before it could ever matter.

As it will be used for assistance in zone clearing, it only needs to be in place bottom of turn 3 and this means there’s no need to have it advanced deployed to begin with. You also want both pieces within 4″ of the objective so their location is pretty much fixed. The boosted rolls are what makes the artillery piece worth bringing, so not benefiting would make the list change useless.

My Mordrikaar list was designed to be a Cryx drop (pretty much copied the list Martin H. used with minor tweaks), but this meant it was to narrow as Cryx for some reason is getting less representation in events this year. I had several events where I just didn’t find a good round to drop my Mordrikaar list and with d&c that’s not a good thing at all.

The main issue against factions like Khador was the lack of ranged defense when moving up for the Nihilators. Also the Cetrati were slow and the bloodrunners often tricky to utilize in a positive manner.

The new releases such as the Keltari and Maximus got me into some list building along with others in my local meta.

After some mixing and matching we ended up with this list:

The list still retains it’s infantry clearing potential, perhaps gained some in the process. It now has more anti ranged tech (which for Cryx was less of a requirement) and the Keltari have nice anti ranged tech (getting to DEF 18 vs ranged on feat turn is nothing to sneeze at)

Also as the caster is Mordrikaar and Hollow is a nice spell, both 10 man units will be tough.

So far I have only gotten 1 game in with this list, but the result vs Khador in that match was much better compared to the original list. In short very promising, more to follow on this one later.

Last week the blog got up to 1000 visits, which made me very happy, as it’s always nice to know someone actually reads these words and that they come back afterwards to read more (^^)

That’s it for now, painting on the Cetrati is advancing slowly (having a cold is not productive at all), hopefully I can get them done this week.