This was supposed to be battrep number 5, but let’s say I did a few things wrong with the video file for number 4 and it couldn’t be salvaged.

So this is number 4, it was recorded during round 2 of the Killbox SR event.

I hope to have some more video’s posted in the not to distant future.

Last weekend I hosted the biyearly SR in Aalst “Killbox”. This was the 3rd edition, and we had 19 players attending. 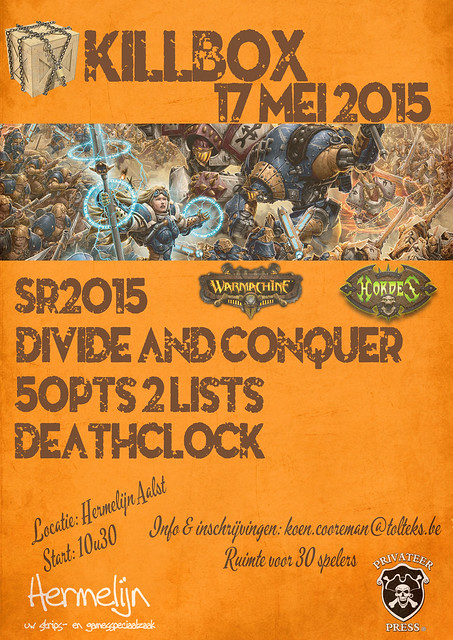 As an experiment I decided to give each table a different scenario, so that scenario selection was random. It didn’t turn out to be a magical solution, it had some positive effects and some negative, no real outliners. I’m not sure if I will apply it to future events, but I might.

The event had all hordes and warmachine factions, something I find really nice, because it creates more variation.

I chose to make it a 3 round event up front since I wanted the players to have a decent lunch break and I didn’t want to rush things to get in that extra round. And for 19 players the advised number of rounds is 5 which it not something I want to squeeze into one day.

We had a best painted award, for players who had fully painted armies. And the winner was Steve Herck.

The event was won by our local player Niels de Vlieger (Cygnar), congrats to him! In second place we had Wout Maerschalck (Cryx) and the 3rd spot went to Peter Gaublomme (COC).

I really enjoyed hosting the event and I hope we can keep having an event like this the following years.

I had my camera set up for one of the battles, after I process the video I’ll have it up on YouTube.

That’s all for now.

I haven’t forgotten about my blog, I just took a few weeks off, not just from blogging, I also put my painting on low priority.

I had just finished painting a ton of models for Cryx, then some more Skorne, which resulted in having 4 50pts lists fully painted, and yes I wanted some time off at that point 😀

I did do some painting however with no real time pressure. I did some work on the Skorne Ferox. This unit will no doubt finds its way into one of my lists at some point, but not at this time which means I don’t have the urge to put the mon the table, and as such I had plenty of time to finish them.

Last week I did have to rush the painting on 2 void spirits, I needed them for an all painted SR tournament.

The next few weeks will be a bit busier, as I have a new project, a Zaal theme force. Needless to say this list consists almost entirely off models I haven’t painted / assembled, and in some cases don’t yet own.

I will have to do some proxying while testing it out because I just don’t want to invest in multiple models of the same type without knowing if this list will be anything interesting for me.

So far I saw it being played in a video battrep and I liked the possibilities I saw, it also seems to give me the options I’m looking for.

I love how Fist of Halaak provides me with a melee punchline supported by ranged treat. Having access to melee and ranged, with both being good solid options is a nice thing.

I love my Mordrikaar list and it has some really nice options, however any form of ranged presence is not part of those options. The tier list I’m going to give a spin will reach Fist of Halaak levels in melee and will have a more precise and harder hitting ranged capability.

The only real question here is if this list will be able to handle Cryx at all. Since it’ll have 2 Raiders and a few extollers, it will handle stealth for sure, it’s volume of attacks I’m more worried about really. It’ll remain to be seen. And ofc with Cryx becoming less and less dominant in the faction spread at events, the “do I have a Cryx drop” question becomes less important. More on that later, I really need to test things out to get a good grasp on this list.

The next few weeks will (hopefully) have more painting updates. The Ferox are near completion, and all those models for the Zaal theme are going to get primed this week as well. Lucky for me stone statues don’t take the same effort as most other models.

I will also try to get the next video battrep out, it’s pXerxis vs eMorvana.

The next few months will be exciting for sure. I’m not sure what my lists will look like once the aradii and the hydra are released.

In the same way I am really looking forward to the releases in the next warmachine book, as a Convergence player I have been hoping for a new warcaster. The new colossal seems like it will only really synergize with the Modulator and that’s not much. So yea a new caster, who hopefully adds something completely new would be huge.