The photos don’t do them justice due to the white turning somewhat yellow under the lamp, but I’ll get some daylight pics up when I finish the next batch of models. 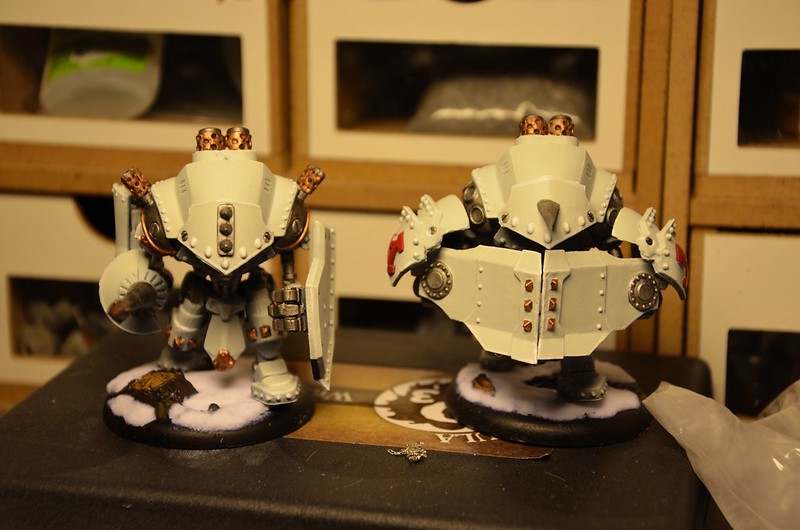 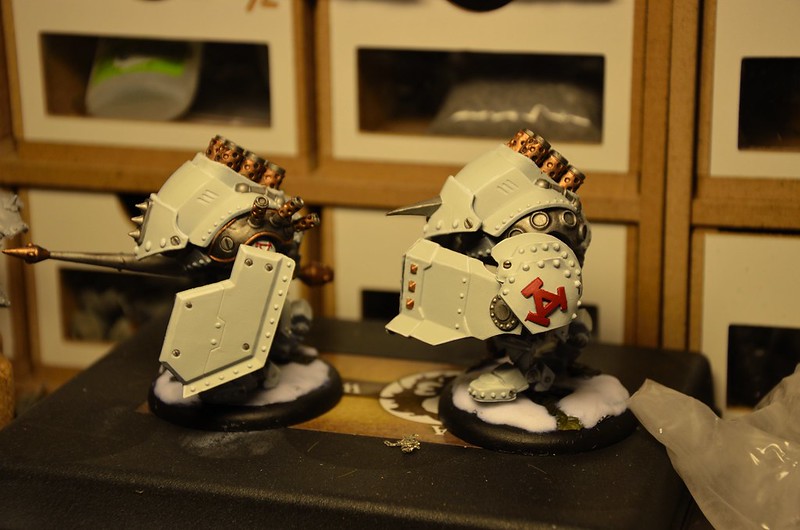 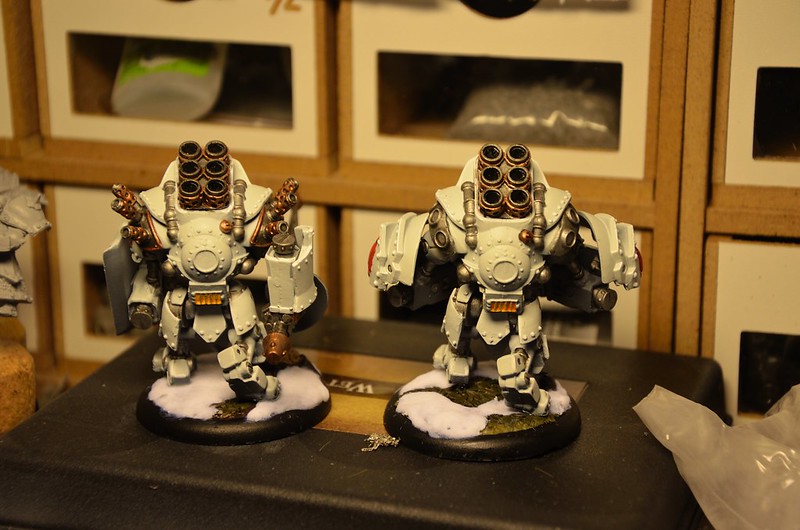 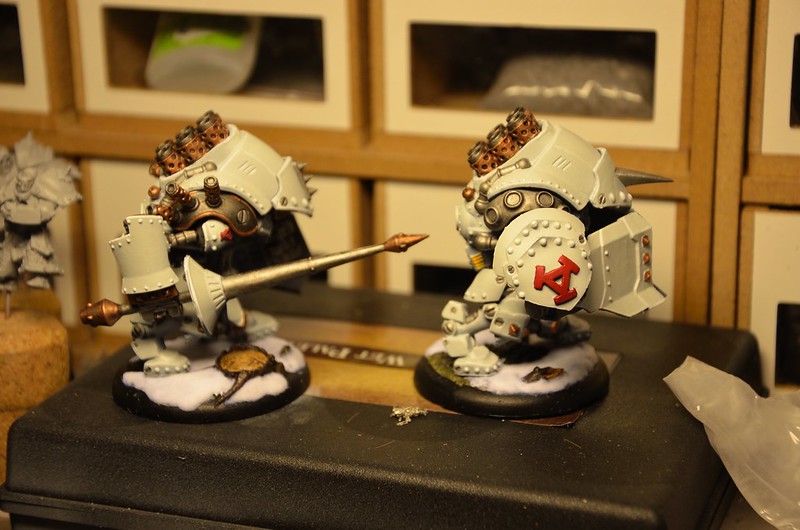 A while back, when I ordered my desert bases for my Skorne, I also ordered forest bases. It saved me on transport costs and I had possible use for them with Ret or Circle, so why not.

When I decided to start a Khador force, I contemplated my options for bases and I just couldn’t find ice or winter bases I liked. Then I realized I could just add snow to the forest bases and it all made sense.

I applied a coating of GW castellan green with the airbrush on the entire base, then I painted the tree stumps and branches using GW Dryad Bark and P3 Rucksack Tan for the interior. The entire surface was then washed with GW Agrax Earthshade.

I then coated the areas who would end up covered in snow with Vallejo Dead White.

I had a few boxes of the GW snow flock sitting around. I first tried applying it like normal flock (watered down pva glue and add flock on top) but that didn’t turn out right at all.

I then found a vid on youtube showing how to mix pva glue, water and the flock on a palette before applying it to the base. This way you can add a thicker paste to the base, which is far better to work with and instantly shows better results.

I looked at the dried result this morning and I did add another layers of snow using the same method. I hope I can add the jacks to their bases tonight.

Some in progress pics: 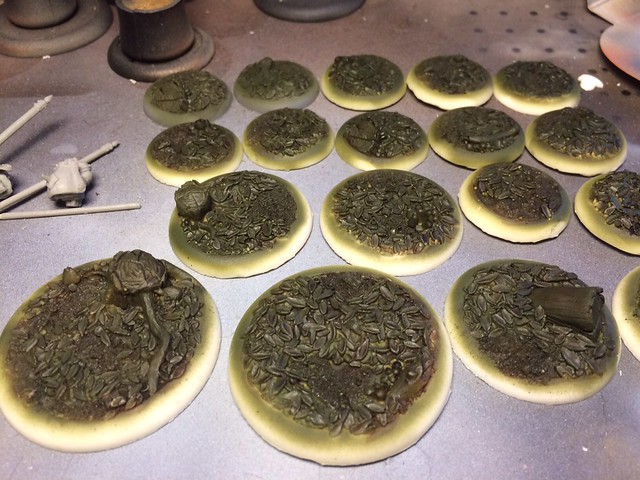 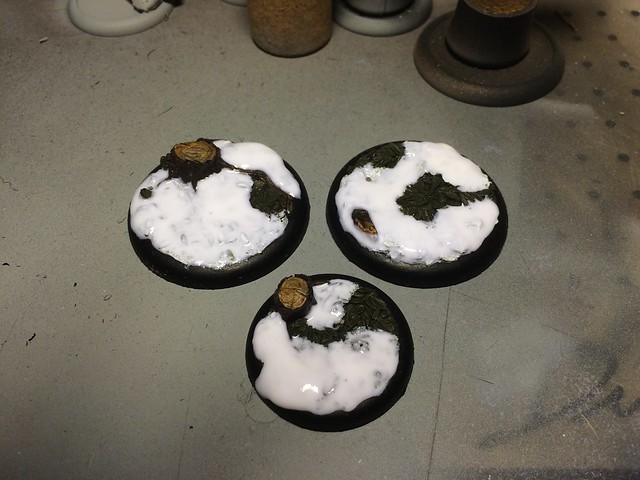 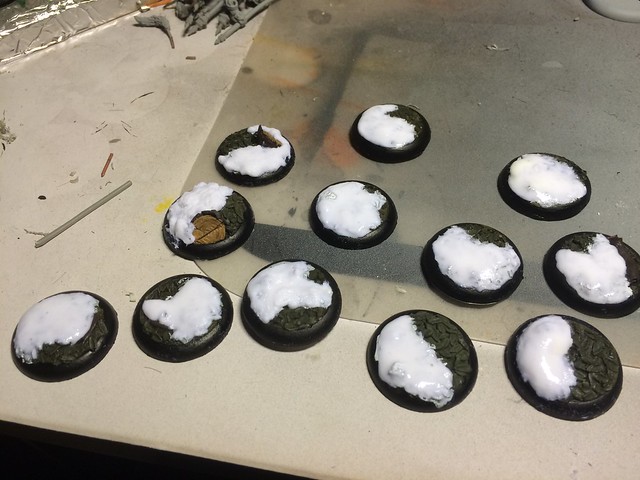 Khador has some really nice looks, but bright red is pretty much what everyone uses and that makes it less desirable. Bright red is the stock scheme so no surprise there really.

From the Administratum grey I switched immediately to GW Uthuan Grey and applied a few coats until I was up to the color I wanted. I then added an edge highlight of Vallejo Dead White.

The metals are P3 Cold Steel, P3 Pig Iron and GW Hashut Copper. I only added a wash of GW nuln oil after the base coat.

The red on the Khador logos is done using a base coat of Khorne red, highlighted with a few layers of Mephiston Red.

The furnace glow was done using P3 Hearthfire and a GW yellow wash.

I only have some in progress pics of the jacks right now as I want to take the final pictures when they are on their finished bases. 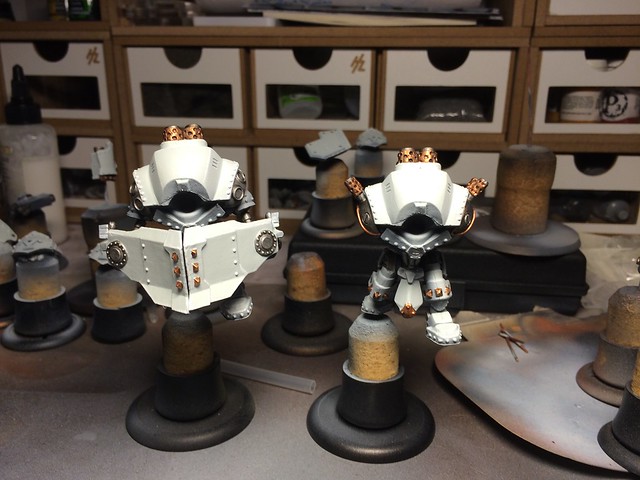 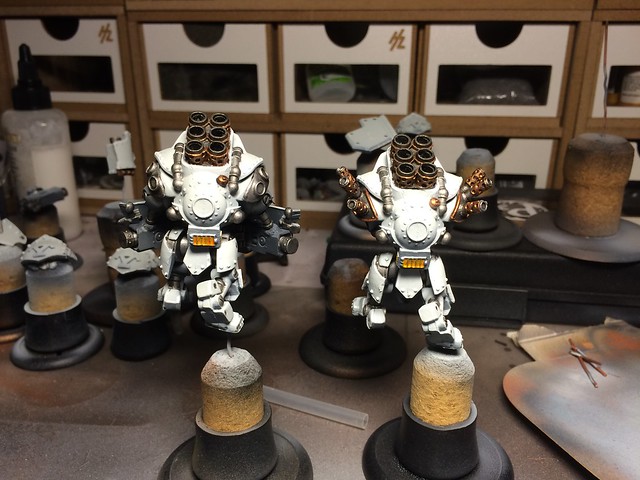 I have been playing Skorne for a good while no wand while I love the faction and will keep putting them on the table in the future, I find the weakness vs Cryx to be an obstacle I can’t cross.

This doesn’t mean I think Skorne is defenseless against Cryx, I just don’t like the odds and more specifically Skarre1 with 30 banes is a question I just can’t find the answer to.

The less versatile playstyle compared to other factions is also contribution to me wanting to shake things up. The beat face approach is cool and rewarding however it becomes rather bland after several months.

The fact that Mordrikaar doesn’t seem to click for me is one of my issues. This is a personal problem which has nothing to do with how capable the model is.

I dabbled with several lists for Mordrikaar, even played some games with lists for eHexy and pZaal but they all fell short in my opinion. I’m not a top player so the idea that I would have to play my A game to compete with someone playing their D game doesn’t sit right with me.

I was tempted by switching factions a few times, my elves were calling from my shelves, my Cryx were seducing me into serving the dragon father once more, but in the end I wanted something new, something different. Khador isn’t a first world country faction, but it has all the pieces.

Casters like Butcher3, pIrusk, eZerkova, eSorcha interest me and I’m planning on exploring what they can do. We have a local Khador player who makes them tick extremely well, so I finally have a faction where I can learn by watching as well.

Spamming infantry (and thus spending time on activations) will be a challenge. I have gotten better in managing my time when playing seriously, I’m still a disaster in casual games because I just talk have fun and forget about the ticking clock… I feel that my time with Skorne has taught me a range of valuable things that will transfer into my future Khador play.

I also realized when checking which models I required for my initial lists, that I already owned a large portion wince I already owned the Nyss, the Boomhowlers and a range of Merc solos.

My total collection of Khador models will consist of the following:

As per the usual I will likely end up owning the entire faction, but I’m pushing myself to be a bit more conservative at first. I want to explore the pairing our local Khador player has used before and then see where I end up.

What draws me into the faction at this point is the more generalist feel, no real focus on either ranged or melee, no focus on pure spell slinging or making the feat stick. Just coherent army compositions complementing each other and having the different options available while not being pushed towards either side.

If I get enough things painted by the end of the week so I don’t need an abundance of proxy models, I might get my first few games in this week.

I’m going to post a picture of my painting progress so far with the Khador jacks next.