In August 2015 I made a post on how I had started stripping some of my Retribution models with the intent of repainting them.

At the time I was searching for a faction to play and ended up investing in some Khador, so my Retribution revamp project was pushed aside.

Now with the announcement of MK3 a couple of months ago, the time had come to see which options I had to answer the big question ‘Which faction will I play in MK3’.

They way I saw it 3 options were possible. I either continued to play Convergence, or I would return to playing either Skorne of Retribution. 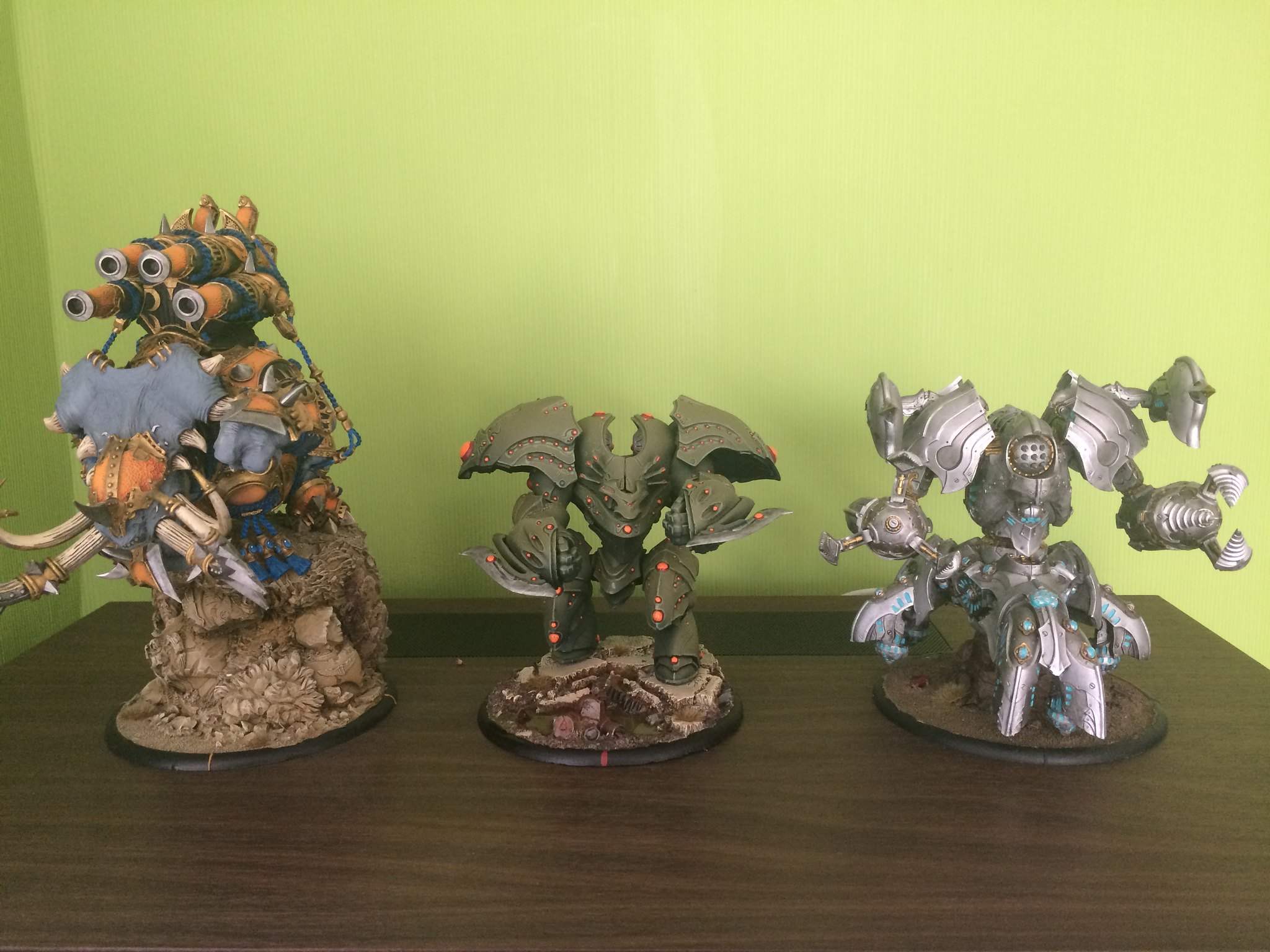 Cryx would be possible because I have the models, but right now I’m not considering them.

The announcement of MK3 took all the fun out of building MK2 lists and spending time learning model interactions etc., so it left a huge gap in my hobby time. And what better way to fill said gap then with painting right?

I still have a limited amount of Skorne and COC models around that I need to paint, but not real substantial amounts so nothing really pressing for painting. Retribution on the other hand was painted, however it was horrible. If I was to play this faction again as a main faction, it would need an overhaul. So I decided to pick up that project again.

I had a scheme in mind, and I still had a unit of sentinels and riflemen who were only primed. I added one of my Griffons and I had a nice “test” batch to try my scheme on.

Results were pleasing and I decided I would keep the scheme. 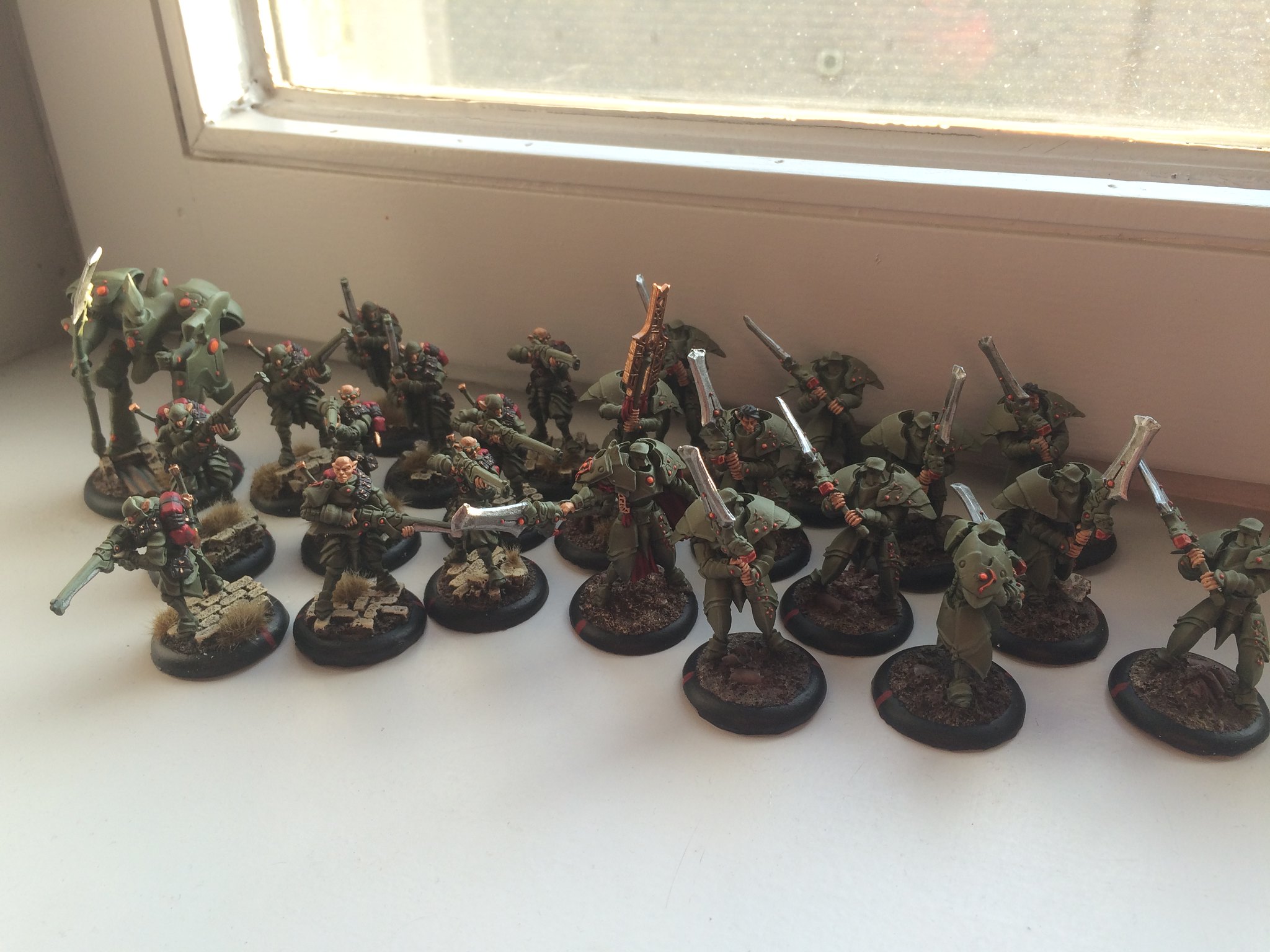 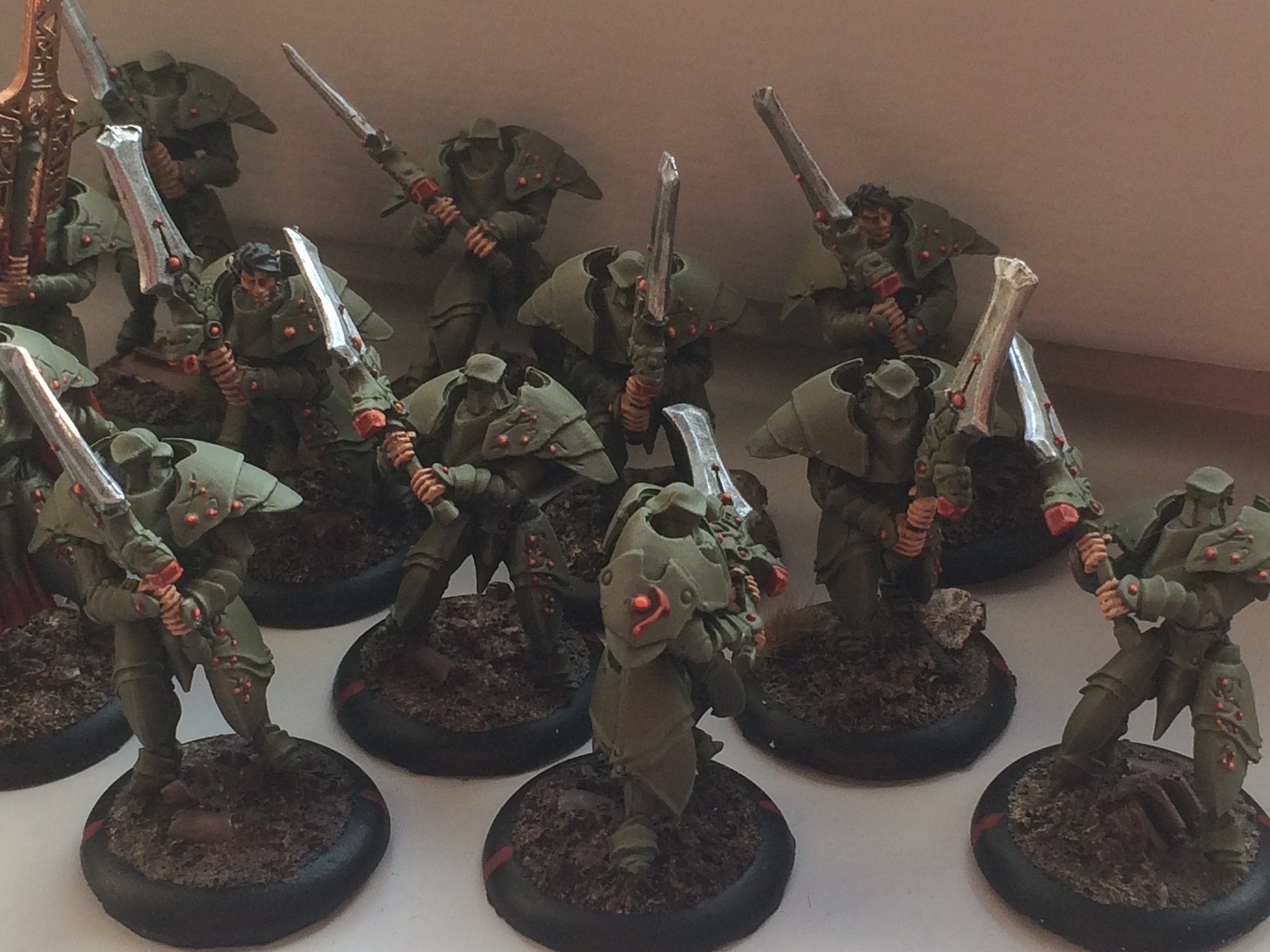 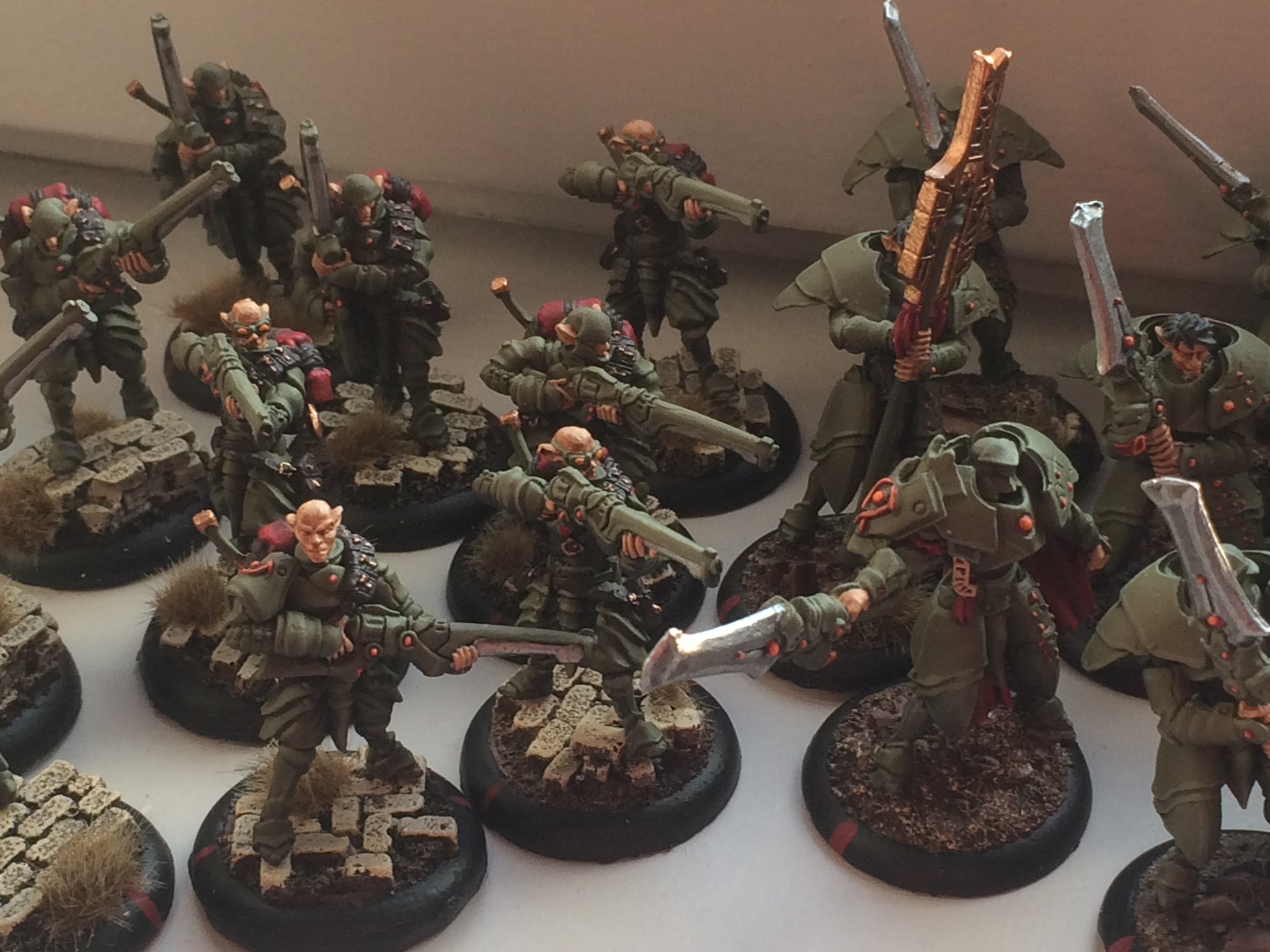 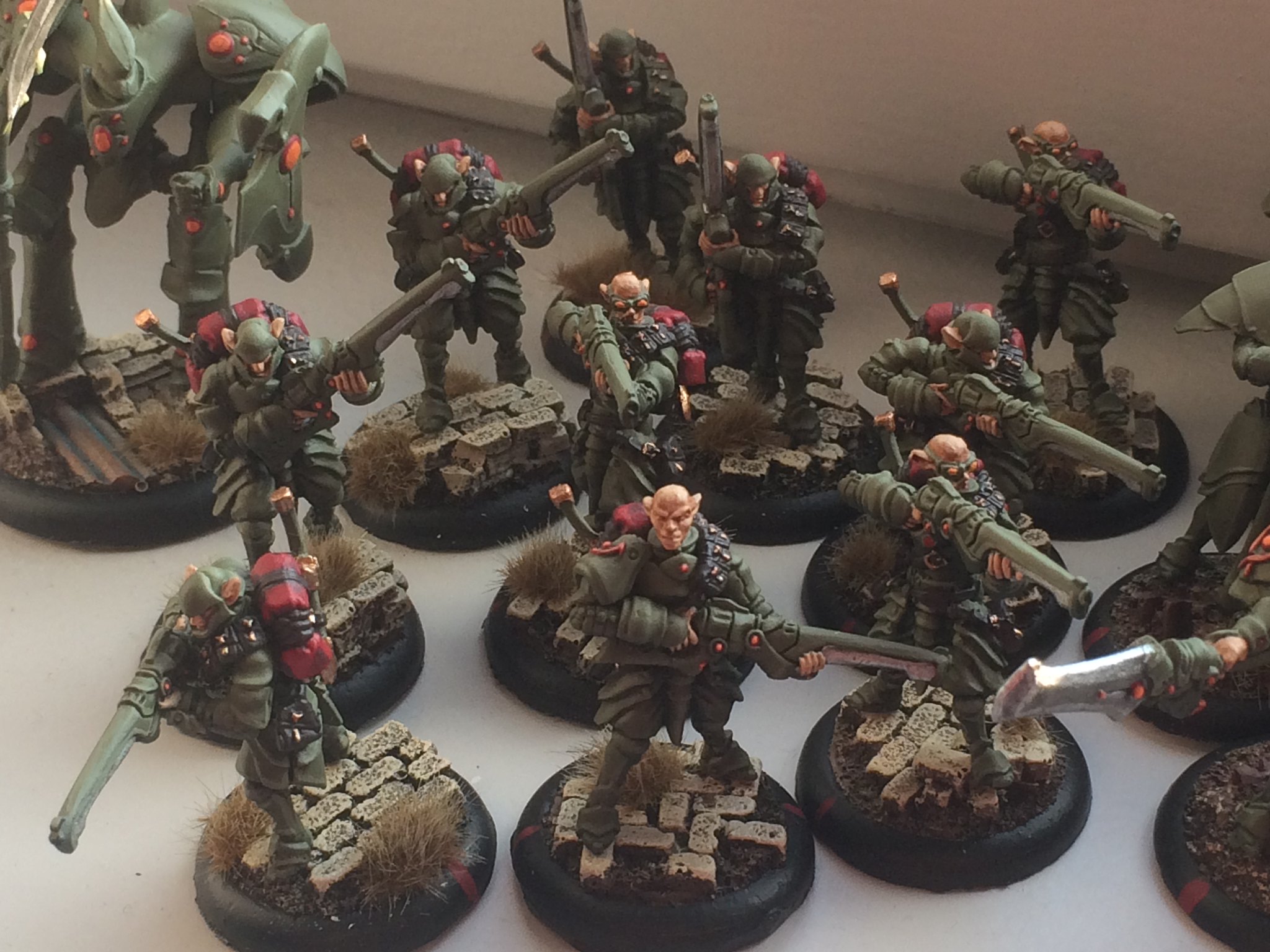 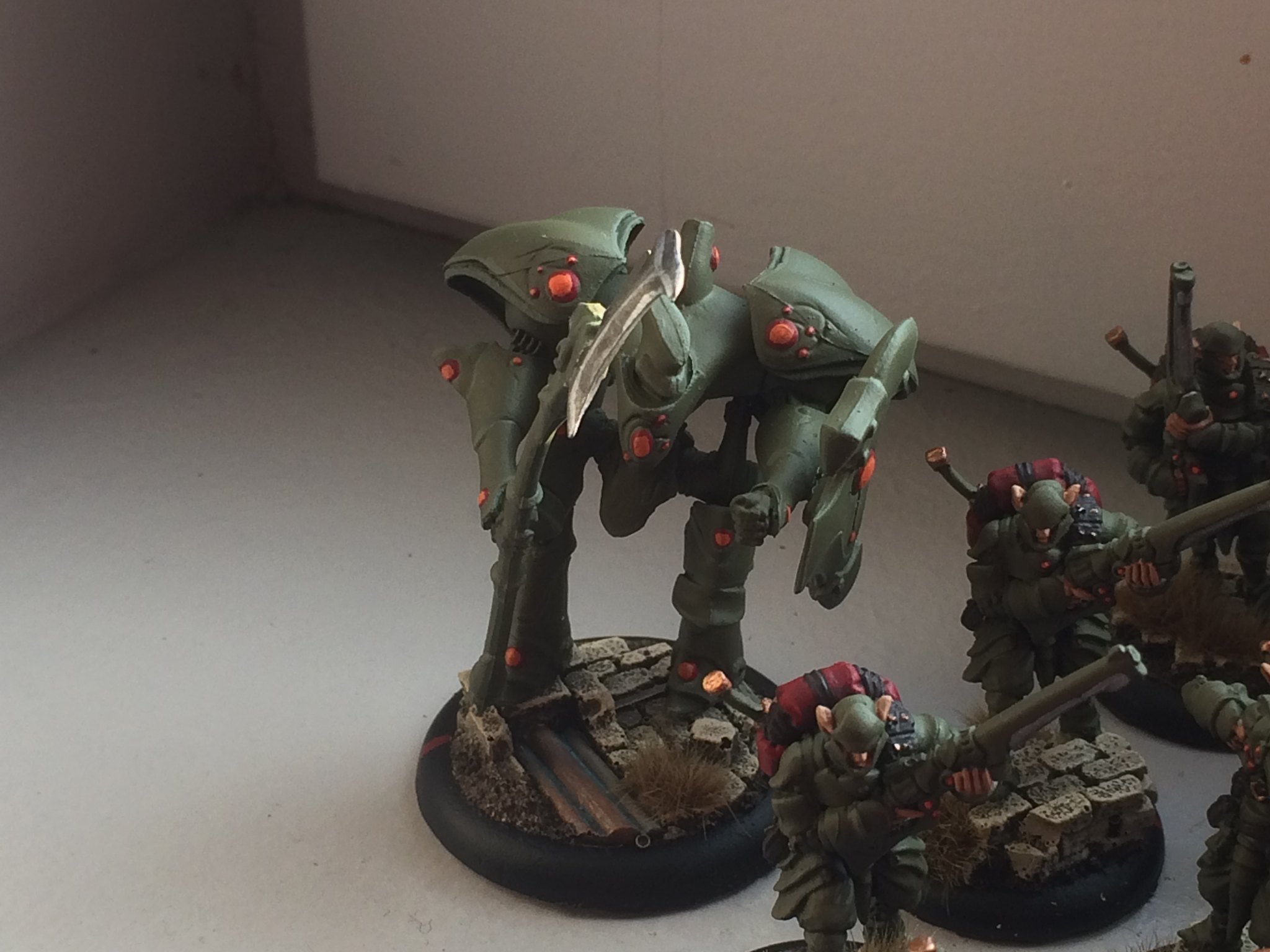 Since then I have also completed all my heavy and most light jacks (except for 1 aspis and like 6 Griffons) and even finished Hyperion.

On Hyperion I did encounter an issue with the paint stripping. It dates from a period where colossals were just coming out and PP (so it would seem) was still experimenting with the materials for their resin.

As a result certain parts had a strange reaction to the stripping fluid. Nothing extreme but not desired either, I’m just glad only the shoulder arcnode thingies got the worst of it and the rest was doing ok afterwards. 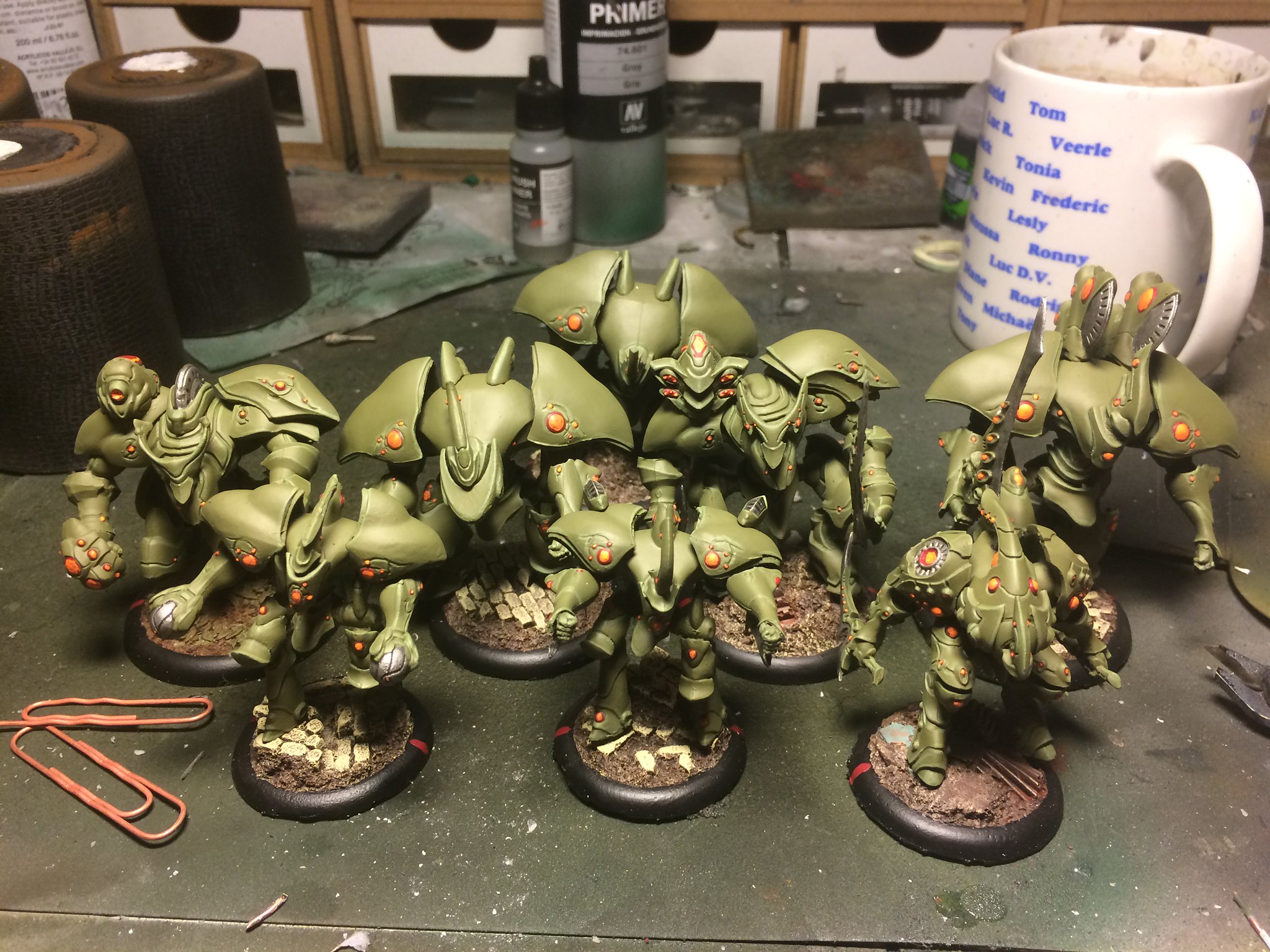 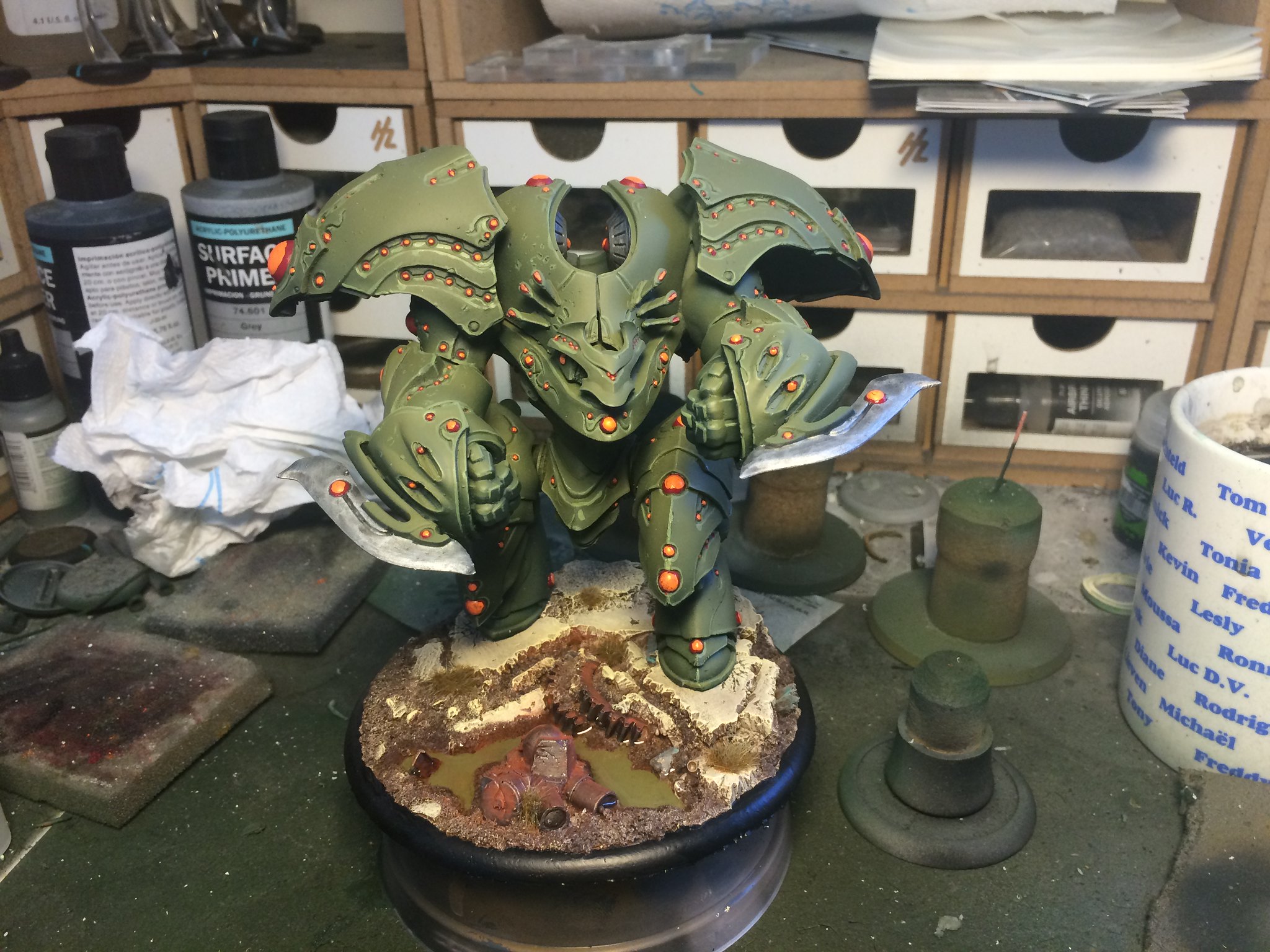 Just to give you an idea of how horrible their paint jobs were before, here are some of the older pics: 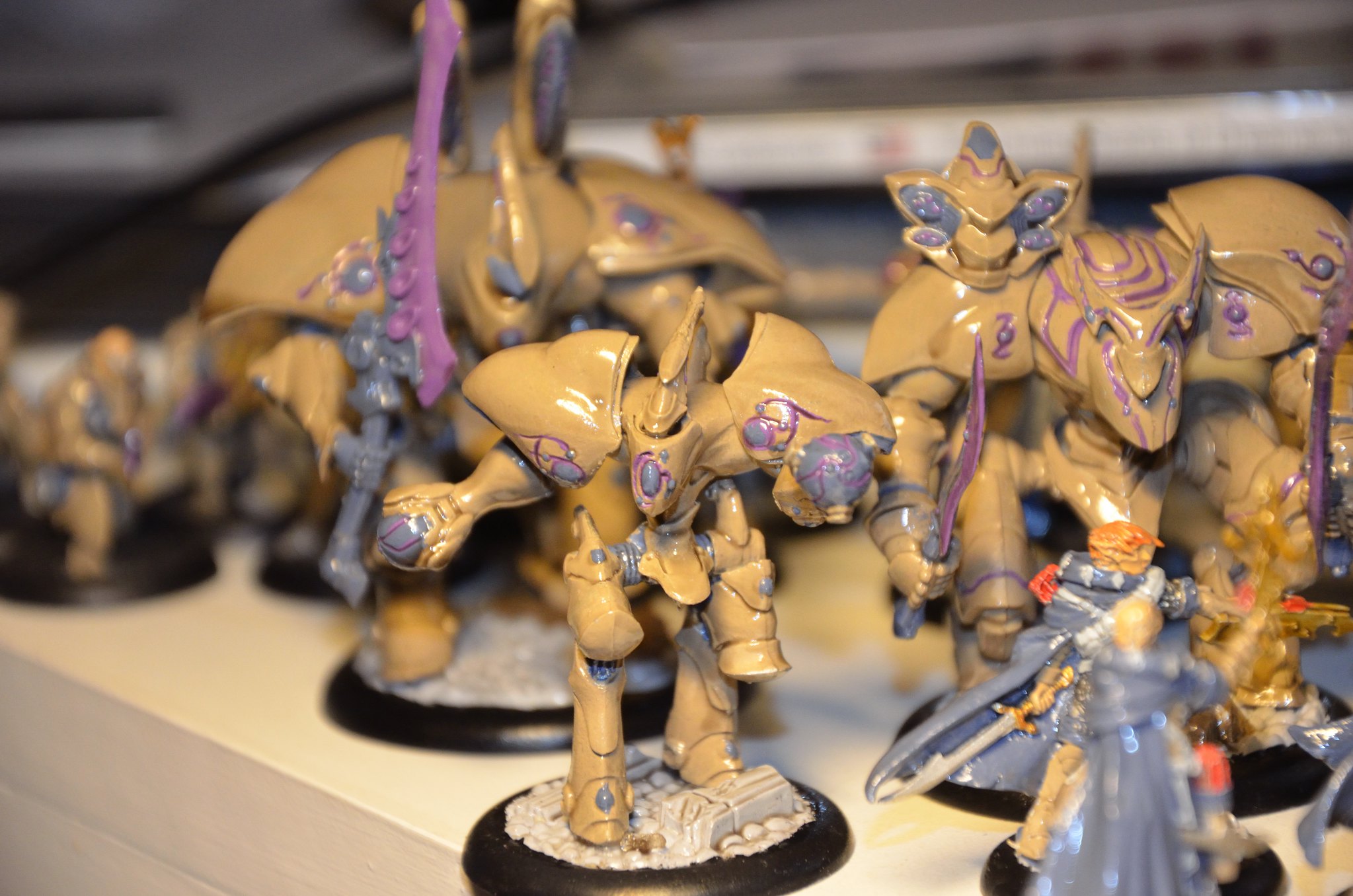 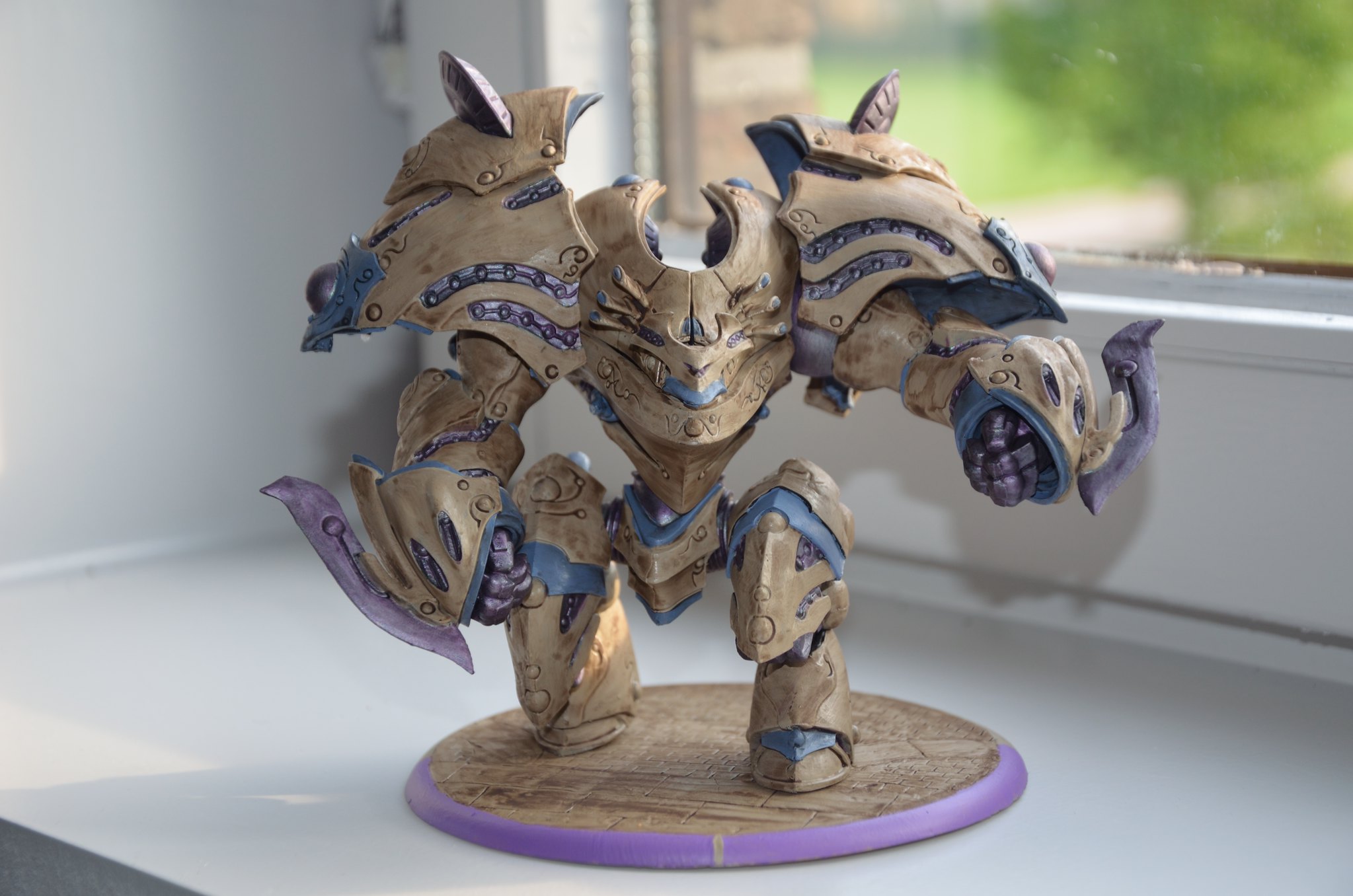 Hyperion is looking a lot better right now that’s for sure. And ofc this is how you prove that over the years you have gotten a bit

Right now I’m giving the warcasters a new paintjob, this will take some more time so a sneak peek is all I’ll give right now: 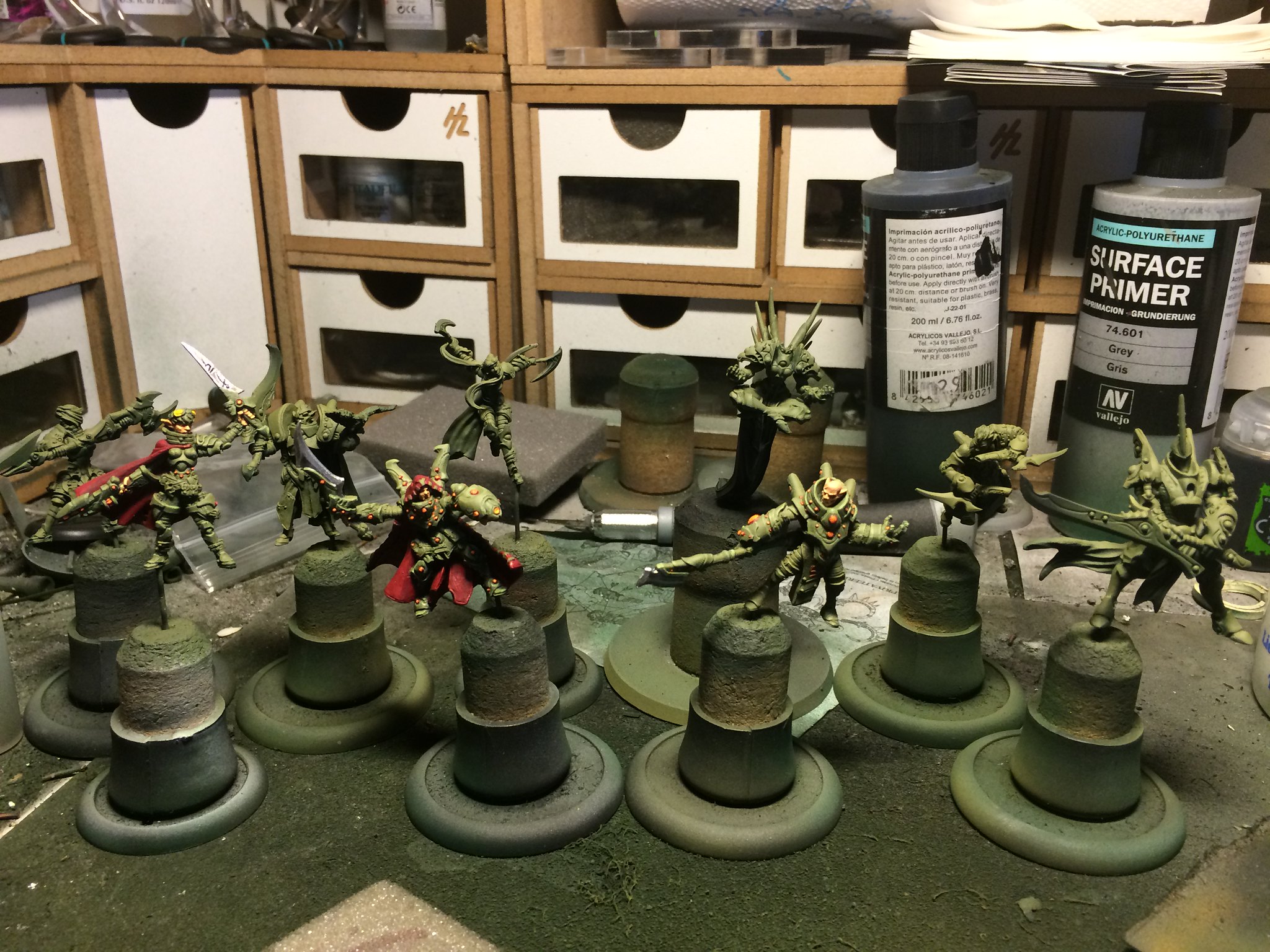 To continue the great which faction should I play discussion, the spoilers given by PP have steered me in the direction of the angry elves for sure and it’s the only battle box that I can buy that contains some “useful” models. I can see use for a second Chimera, a second Shyeel chassis to magnetize is welcome as well. (Currently I have one jack magnetized, and I may magnetize one Vyre chassis I still have in reserve)

So I would also end up with Griffon number 8 which may or may not be a good thing… time will tell how spammy we can go using jacks and that little guy is a real good package for its point value.

Convergence looks pretty solid, however it seems like it’ll come down to “you have to play those 2 casters” again since theme forces are gone and the casters will only receive minor tweaks. And my main fear with the faction is boredom from playing the same thing over and over. So as currently spoiled Convergence is not an option for me.

When looking at Skorne and Retribution, I lean towards Ret more and their spoiler was pretty great, so for now that means I will most likely go with Ret. the jury isn’t out yet but I think the only thing that could change my mind now would be some really interesting Convergence rules out of nowhere, and that’s pretty unlikely.